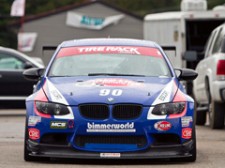 Fans of professional sports car racing have likely seen the BimmerWorld Racing team competing in a variety of series over the years, including GRAND-AM’s Continental Tire Series where the BMW experts won a pair of Street Tuner races this season. But this December 8th, the BimmerWorld race team, joined by long-term sponsor and technical partner Red Line Oil, will set their sights on an overall win at the grueling 25 Hours of Thunderhill.

With its converted GRAND-AM Grand Sport V8 M3 serving as the foundation for its entry in the unlimited ES class, team owner James Clay and an impressive collection of pro and amateur racers will pilot a car that’s received countless performance upgrades since BimmerWorld threw out the Grand Sport rulebook in an effort to build the fastest production-based V8 M3 in the country.

As an integral part of BimmerWorld’s race program, Red Line Synthetic Oil Corporation has provided a range of lubricants and additives that has been the lifeblood of BimmerWorld’s machines for years, and this monster M3 is no exception. A healthy diet of Red Line products has kept the V8 engine and driveline cool and protected during the warm summer events, but with temperatures near freezing expected overnight during the 25 Hour, Red Line VP/COO Cameron Evans believes the team, car and test ahead is the perfect challenge for what the renowned company is looking to prove in the marketplace.

“The 25 Hour has become the iconic race to follow for the enthusiasts that are into specific brands and aftermarket modifications,” he said. “With BMW as one of Red Line’s best served niche markets, developing and racing this Production M3 with BimmerWorld shows how serious we are about this next generation of tuning and racing cars.”

For Clay, sending team on a 3000-mile trip across the country to race at Thunderhill with Red Line at NASA’s premier amateur endurance event was an easy choice to make.

“The 25 Hour is a brutal test of endurance, but if all goes well the reward is on par with the effort invested,” he remarked. “When I was working with Red Line Oil to come up with a schedule for the Production V8 car program, we were both looking for events that showed the car’s speed, the durability of our products and that highlighted our effort in a variety of environments.”

“Like anything we do on the race team, the result is important, but the process is as well,” explained Clay. “A win is a tall order in this highly-competitive event, and while BimmerWorld enters every race with the intent to win, the knowledge gained about the car and its components at Thunderhill will also produce valuable results for our line of products. We don’t take the ‘Race Proven Performance’ stamp of approval lightly – it doesn’t mean the parts we build and sell were tested on my drive to work or in a few test sessions at the track. Thunderhill is the most extreme environment for equipment to survive, and our customers will ultimately be the winners from this race and development program.”

Away from the press and TV cameras, the Dublin, Virginia-based team stays true to their roots, often returning to compete along-side friends and customers in various club series. In addition to its wide array of BMWCCA, NASA and SCCA activities and customer support programs, the team has found the definitive event to express its passion for endurance racing and free-thinking automotive creativity at the 25 Hours of Thunderhill event in northern California.

Originally one of the first few V8 E92 M3 cars in the US, and having served in past lives as a street performance testbed featured in Roundel magazine and later as a GRAND-AM GS-class racecar, the development of the BimmerWorld/Red Line Oil Production V8 project has continued to progress at rapid pace. Now focused on pure speed, performance, and durability, demonstrated at a schedule including a variety of events, the team has been able to express its passion for endurance racing and free-thinking automotive creativity.

With 25 straight hours of navigating Thunderhill’s twisting 3-mile, 15-turn circuit posing the greatest test for the 80-plus cars that start the race, BimmerWorld will rely upon the extensive chassis and handling improvements to its Production V8 project car to stand out from the competition.

First, the team put the car on a diet, dropping 300 pounds from its GS days, installed 3-Way dampers from Motion Control Suspension, and fitted a bevy of BimmerWorld suspension components designed in the team’s World Challenge Touring Car days, including full spherical links with both suspension and steering geometry correction. On the aerodynamic front, keeping the Production V8 planted to the ground was aided with a BimmerWorld carbon package, including with a splitter and dive planes up front and a wing and lightweight trunk at the rear.

The Drivers Weigh In

BimmerWorld will draw upon the experience of a familiar set of drivers next weekend, with Clay, Harold Petit and three of its 2012 GRAND-AM race winners, Gregory Liefooghe, Dan Rogers and Seth Thomas taking turns behind the wheel.

Petit, whose Johnstone Supply stores support BimmerWorld’s Street Tuner effort, is a veteran of the team’s Club Racing endeavors, and will tackle his first twice-around-the-clock (plus an hour) event in the Production V8.

“I really enjoy endurance racing and the way to win is to have the right team, right preparation, and right strategy with the right speed. BimmerWorld is that team, ”he said. “It is wonderful to be a part of the BimmerWorld team for an event like this and to join a group of folks in which I have made lasting friendships.”

For Alaska native Rogers, who won the biggest race of the year with Thomas at the Indianapolis Motor Speedway Continental Tire Series round, racing at the 25 Hour has become an annual tradition.

“This will be my fourth attempt at a win at Thunderhill in a BMW, and from a preparation perspective, the one with the best chance for an overall win,” he said. “No one puts together a race or track car like BimmerWorld.”

Like Clay, Thomas and Liefooghe raced BimmerWorld’s GRAND-AM GS V8 M3s in 2011, and for Thomas, jumping into the faster, angrier version of the car for long periods at the 25 Hour is something he’s been looking forward to.

“I can’t wait to get back in the seat of the BimmerWorld’s V8 M3, now the ‘Production V8,’” he said. “I had a taste of the new car this past year at VIR during a BMWCCA Club Race and it was a lot more fun car to drive on the track then. Since that time the guys in the shop have added more go-fast parts and done more development to make it easier to drive and even quicker on the stopwatch.”

Liefooghe, who serves as a racing instructor at nearby Sonoma Raceway, is also a veteran of the 25 Hour and can’t wait to rocket around Thunderhill in BimmerWorld’s ultimate Production V8 M3.

“I have to say I’m looking forward to pretty much everything on this car,” said the winner of this year’s GRAND-AM ST race at Barber Motorsports Park. “Whether it’s the added downforce, the stickier tires, the more powerful motor or the sequential gearbox, the car is easier to drive, and faster. How can you go wrong with that?”

Follow BimmerWorld’s progress all weekend at www.BimmerWorldRacing.com, and live timing and scoring from the event at www.NASA25Hour.com.