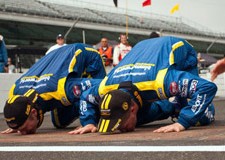 The BMW experts at Dublin, Virginia’s BimmerWorld withstand rain and 33 other cars in the GRAND-AM Street Tuner field to finish first and second at Indy.

The BMW experts at BimmerWorld, the Dublin, Virginia based team, win the first-ever GRAND-AM Continental Tire Series race held on the hallowed grounds at Indianapolis Motor Speedway. The team finished first and second in the Street Tuner class while extending the German car maker’s hold on the prized manufacturers’ championship.

The win came during a tricky afternoon of competition when heavy rain interrupted the race and a combination of inch-perfect driving and smart race strategy calls were required to reach Victory Lane.

Thankfully, for the veteran road racing team, every mechanical component required to reach the top step of the podium was delivered throughout the race by a flawless team.

In addition to the dream 1-2 finish for the team’s self-built, production-based BMW 328i racecars, the BimmerWorld team added a few other accomplishments to their debut on the 2.5-mile, 13-turn Indianapolis road course.

The victory for Seth Thomas and Dan Rogers in the No. 82 CRC BRAKLEEN® BMW marked BimmerWorld’s second win of the season. First, was the win claimed by Gregory Liefooghe and David Levine at Barber Motorsports Park in the No. 81 entry. This also brings Thomas’ GRAND-AM ST win tally to three since the 2010 season.

For his teammate, Alaska native Dan Rogers, the win was even sweeter. The world’s most famous race track served as host to his first professional victory. It also ranks as the first ST win for CRC BRAKLEEN®, the primary sponsor of the No. 82.

Put it all together, and BimmerWorld delivered an amazing performance on a giant stage.  James Clay, team owner and co-driver of the second-place No. 80 credits the 1-2 result to his trusted team of technicians.

“We had really good cars when we tested here two weeks ago, but we didn’t feel like we had winning cars, necessarily,” he remarked. “Between the test and the race, my team probably put in 1000 man hours to try and improve every little area on the car and it paid off. Winning at Indianapolis is just something that you can’t put into words.”

For Thomas, who ranks as one of the best touring car racers in the country, winning at IMS with the BimmerWorld team ranks as the highlight of his career.

“It’s one of those deals where you try not to be superstitious and kiss the brick before the race, and it’s not a ‘me’ that did this but a ‘we’ that won this,” he said. “Having the No. 80 there behind helping me the whole way to the checkered flag was crucial for us. To be the first GRAND-AM ST team to win at Indianapolis in a sports car…it’s amazing.

“And as a boy growing up in Georgia, I guess people figured I should be here driving a stock car, but to win in a BimmerWorld BMW is just so gratifying.”

Thomas’ teammate, Rogers, was just as ecstatic after watching the No. 82 cross the finish line.

“It’s pretty incredible,” said Rogers. “How many people can say they won their first professional race at Indianapolis? Not very many, I’m sure. The guys did a great job on the car; it was transformed since the last few races and our engineer and crew called an amazing race strategy. I figured we had a shot at winning this year, but you never think it’s going to come at a place like Indy.”

Following home the No. 82, John Capestro-Dubets (“JCD”) closed out the race after taking over from Clay and earned the third consecutive podium for the No. 80.

“We had a fantastic car, qualified well, which was a rewarding deal for everyone, and it was again a testament to our team,” said Clay. “In my stint, there was a lot of shuffling, I handed the car over to JCD who worked it up to the front. We pitted early, put JCD in, and used a fuel smart fuel strategy and a lot of talent to bring the car home for our third podium in three races. There’s a lot to be proud of.”

The third BimmerWorld entry of Liefooghe and Levine ran strong and had plenty of pace, but a mid-race issue left the No. 81 out of a possible 1-2-3 finish.

BimmerWorld’s fine day at Indy also had a major impact on the points standings. The Nos. 80, 81 and 82 are now in the top 10 in the teams’ standings, with the surging No. 80 in fifth with two rounds to go.

Clay and JCD also moved to sixth in the hunt for the drivers’ championship. BimmerWorld’s constant representation for BMW has the brand leading the standings ahead of eight other manufacturers.

“We have two more races in the championship, and I want to lock down the manufacturers’ championship for BMW,” said Clay. “BMW is a fantastic road car, a fantastic racecar, we’ve supported the brand for 13 years in our racing and I wouldn’t choose any other marque to go into battle with. To get BMW’s first win at Indianapolis is an honor, and as we’ve scored their main points in seven of eight rounds so far, we want to deliver that title for BMW when the season is done.”

On a day when there was much for BimmerWorld to celebrate, first-time winner Rogers put the race into perspective for himself and the entire team.

“I think it’s going to take a while to hit everyone,” he said. “It’s such a big accomplishment…it’s hard to fathom. To think of all the guys who’ve kissed that yard of bricks, all the winners at Indy over the years. And I just got to do it myself…amazing.”

Follow BimmerWorld as the team prepare for the penultimate round in Monterey in September, and watch the race at Indianapolis when it airs on August 5th at 12 p.m. ET.