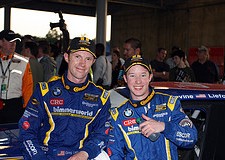 Drivers tend to get all of the credit when they win a race, but as the BMW experts at BimmerWorld reminded its rivals on Saturday, it also takes teamwork, strategy, and an incredible amount of talent amongst the pit crew to earn a trip to victory lane.

BimmerWorld’s three-car fleet of BMW 328is not only survived the crash-filled Continental Tire Series race at the sprawling Barber Motorsports Park facility in Leeds, Alabama, but left with the Street Tuner class win, a pair of top 5 finishes, and the lead in the drivers’ and the teams’ points standings.

At the end of the 2.5-hour event, Gregory Liefooghe and David Levine, drivers of the No. 81 BimmerWorld BMW 328i, were celebrating their first series win, the No. 82 CRC BRAKLEEN® BMW 328i driven by Seth Thomas and Dan Rogers secured a solid fifth-place finish while playing the role of tail gunners and the team’s pit crew was credited by team owner/driver James Clay for their peerless efforts.

“Daytona was a solid start to our 2012 season and we knew we had a great program – the win and strong showing at Barber confirms that,” he said. “We have done a lot of development work over the winter to shore up any sagging performance areas of the car and really left no stone unturned for improvement for this season.  The guys in the shop have been hard at work perfecting the car we put on the track and I think it is starting to really show.”

Clay also recognized the unique position his team was placed in when a few competitors ahead of the No. 81 fell afoul of the rulebook during a caution period, but knowing those rules paid off for BimmerWorld at Barber.

“This win was made easier for us to some degree by a couple of cars that got caught out with the on-track procedures, and having been on the other side of that in 2010, I know that was a bad deal,” he explained.  “But even without the pure speed to win on this tighter track, the full team executed on this performance, from crew to drivers, to race engineers and we were there to take the opportunity that was given.”

For Liefooghe, one of the most respected veterans in the paddock, his breakthrough win was both emotional and long overdue.

“I have to say this win feels like an accomplishment,” he remarked.  “There is indeed a lot more involved than it shows in our win today. It was a team effort, where the strategy called by our engineer, Dave Wagener, was an integral part of the result.  We managed to stay out of trouble and not make mistakes, and it shows that we have a rock solid program.  This win rewards all the efforts made during the off-season and the hard work that has been put in during the whole race. Although the season is just starting, this result puts us in a great spot for the championship and I think it reinforces the fact that David and I are working well together.”

Liefooghe also had a special message for the man who helped get him to where he is today.

“It is my first win in the CTSCC and it is a big stepping-stone,” he continued. “I would like to dedicate it to my father who supported me and pushed me to follow my passion throughout all these years. Dad, this one is for you!”

With so many cautions happening during his opening stint, Levine didn’t get the opportunity to do much wheel-to-wheel racing, but says the chance to spray champagne as a GRAND-AM race winner was everything he thought it would be.

“I cannot describe the feeling of being a winner in the Continental Tire Sports Car Challenge series in only my third start.  The start of the race was quite frustrating as I only got about seven feet of green flag racing before the GS-class crashes started.  Putting the frustration aside, spraying champagne as a winner has been a highlight in my life and I hope I can keep doing that for the rest of the season. This win is also the first win in a while for our crew chief, David Wagener, so I made it a point to spray him first.  This weekend was truly incredible! Thanks again to the crew and everyone involved.”

The road to fifth was just as exciting for Thomas and Rogers, and when presented with the opportunity to try a high-risk pass for the lead, Thomas says supporting the sister No. 81’s charge to the checkered flag took precedence.

“As a racer, when you see an opening that you think you can squeeze your car into on the last couple of laps you want to take it, but after seeing the No. 81 BimmerWorld BMW in front of me, I had to think about the team and the season’s results.  I thought about the points situation of Greg and David during the caution, and the only way I would go for the spot is if Greg made a mistake.  He didn’t, and my job was to protect him as much as possible to give BimmerWorld and BMW a shot at winning the championship at the end of the year.”

“Seth and I have known all along that the No. 82 will be a regular visitor to the podium; it’s just a matter of when,” he said. “It was going that direction at Daytona until Seth got hit, and on the last lap restart at Barber, we were P2, behind Greg, before we were then shuffled back a bit. A fifth-place finish is great, but it’s just a step to the podium for the No. 82 CRC BRAKLEEN® BMW 328i. Congratulations to David and Greg for a second great finish. Bring on Miami!”

The third BimmerWorld entry, the No. 80 BMW 328i piloted by Clay and John Capestro-Dubets, wasn’t as fortunate in the race, encountering contact which dropped the duo well down the finishing order.

“Our run in the No. 80 car was geared up to be a good one, but there were a lot of cars on track and unfortunately, John was one of many that suffered from the close quarters,” said Clay.  “As a driver you are always learning and improving and even bad races teach lessons.  I have a lot of faith in our driving team and as the season progresses, we will continue to tweak and improve.”

Clay also recognized the many layers of support that enabled BimmerWorld to return to its winning ways.

“We had some great support this weekend from the folks at CRC BRAKLEEN® and NAPA, and I was happy with our result with our sponsors watching,” he said. “I am also really proud of all the guys on the team who picked up extra responsibility as our crew chief Jason Marks was at home with his wife preparing to have their first baby.  They did a great job and produced a strong result.”

With eight races left on the calendar, Clay admitted that he and the team will enjoy their results at Barber in the short-term, but won’t let the victory or their place in the championship distract BimmerWorld from its season-long goals.

“It is great to be leading the Championship at this or any point, but all it means is we have had a couple of good races,” he said.  “There is a long season ahead of us and certainly we will put our heads down and continue to produce results.  I’ll start getting excited a lot closer to the checker flag at Lime Rock in September.”

Next up for BimmerWorld is Round 3 at Homestead-Miami Speedway on April 27-28. Follow the team’s progress as they prepare for the event at www.BimmerWorldRacing.com, and be sure to watch the No. 81’s win April 8th at 12 p.m. ET on SPEED.