BimmerWorld Poised And Ready For GRAND-AM Season Opener At Daytona 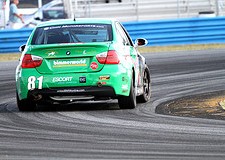 After months of behind-the-scenes work, countless hours of mechanical devotion, and an endless pursuit of superior engineering, BimmerWorld is ready to go racing.

With the first race of the 2012 Continental Tire Sports Car Challenge set to kick off on Friday at the historic Daytona International Speedway, BimmerWorld’s three-car fleet of Street Tuner-class BMW 328is are prepared to help the team earn the drivers’ and manufacturers’ titles.

“For the 2012 season, we have one goal – the Championship,” said James Clay, BimmerWorld’s owner and co-driver of the No. 80 entry. “Certainly this goal is met by winning races, poles and racing well, which I think we have the driving roster to do all three. It also requires having quality equipment, running it effectively, and a lot of hard work along the way and our team already seems to be executing at the level required. We have done a lot of work over the offseason to put all the elements in place and hopefully now we just have to press the start button and send it all into action.”

BimmerWorld, along with other Street Tuner teams fielding normal-sized cars in 2011, found the smaller models in the field to be at a marked rules advantage. Rather than wait for the rules to be balanced in their favor, Clay and the technicians at BimmerWorld engaged in a top-to-bottom assessment of what improvements would return the 328i chassis to the front of the field.

“I have to focus on what I can control and I know for sure that our cars are dialed in and ready to run at 100%,” he said. “I know Daytona is a good track for our bigger cars with the sweeping turns and long straights. As the tracks start to tighten up we aren’t as nimble, and even at Daytona, the smaller and forced induction cars get a good jump off the corner, so other tracks won’t be as kind to us. I like the fact that we should be able to start the season with some momentum, and we will leave no stone unturned through the rest of the year working to find the performance level to stay on par with the smaller cars.”

Coming off of a strong final pre-season test at the “Roar Before The 24,”Clay and his teammate in the No. 80 328i, sophomore ST sensation John Capestro-Dubets, jelled quickly and demonstrated plenty of speed.

Clay knows that the No. 80 has the potential to be successful at Daytona and every other round, and explained how adopting a fluid game plan for each race is mandatory.

“You can’t approach an event with reckless abandon or extreme caution,” he said. “I think we have the experience to know when it is time to maintain and when it is time to act, and the result comes from proper timing of the two. We are all-in this season to win the Championship.”

For Capestro-Dubets, using the right season-long game plan is also going to be key if he wants to continue distinguishing himself from the other young drivers in the field.

“My rookie year was good, but coming into 2012, I have a whole new mind set,” he said. “It’s no longer time to just focus on driving fast and staying out of trouble; now I need to start producing results. I feel confident that James Clay has made a good decision by allowing me to share closing responsibilities in the No. 80, and I plan to reward that show of faith. BimmerWorld has done amazing job preparing the car and also preparing me to have a very competitive season in ST.”

In the No. 81 BimmerWorld BMW 328i, returning pro Gregory Liefooghe will lead GRAND-AM newcomer and fellow Exclusive Management teammate David Levine. The sports car veteran came away from their most recent test feeling confident about what he and Levine can achieve in 2012.

“I think David and I developed a good relationship during the Roar,” he said. “His driving style works well with mine and we’ll be working well together during the season. For this race, the number one goal will be to finish on the podium. Daytona, with the long straights and significant drafts, always comes down to the last lap and our number two goal will be winning the race while keeping in mind our main goal, the championship.”

By the end of the test, Levine had logged enough miles to enter his first ST race with a sense of what the car is capable of, and also what can expect to achieve in his rookie season.

“The Roar was extremely helpful for me,” Levine said. “I needed the time to adjust to the car. It is heavier and more powerful than the cars that I drove last season. I feel that the speed is in the car and I am confident that we can get a solid top 5 finish in the season opener at Daytona. My goals for the race are simple—to qualify the car towards the front and then hand the car off to Greg in the best condition possible so he can go for the win. I believe that we are completely capable of top 5s and top 10s all season.”

Rounding out the BimmerWorld line-up is Seth Thomas and Dan Rogers in the No. 82 CRC BRAKLEEN® BMW 328i. With the two touring car veterans already forming a fast tandem effort, Thomas says there’s every reason to feel positive about what they can achieve together.

“The Thomas/Rogers duo is in this season for the long run and we have our eyes on the prize at the end,” he said. “We both know that to be able to contend for the championship, we have to be there at the end with a fast car. My crystal ball says you will see us, along with our other teammates, being contenders for every race win as well as the end of the season fight for the Championship.”

Paired with Thomas, who achieved a statistical tie for the 2010 ST championship with BimmerWorld, Rogers believes that with a bit more circuit knowledge under his belt, he and Thomas can bring 2010’s success—and more—into their efforts this year.

“My biggest current challenge will be to learn the remaining tracks that I did not drive in my initial season in ST,” he said. “Seth and I are working on plans to attack that problem, so we will be in the hunt for the entire season. Our goal in the No. 82 is nothing short of a championship. That’s a huge goal in a field as good as it is this year in ST, but we will approach it with a plan, and then execute. BimmerWorld has shown that they can field a competitive car in ST, and we plan to reproduce the results of 2010, but with a slightly different ending.”

Follow all of BimmerWorld’s action from Daytona this week at www.BimmerWorldRacing.com, and tune-in to watch the BMW Performance 200 At Daytona on February 4th at Noon ET on SPEED.