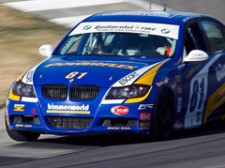 Elkhart Lake winners Gregory Liefooghe and Tyler Cooke take fifth at Kansas in the No. 81 BMW

Coming off of a win in the GRAND-AM Continental Tire Series race at Elkhart Week on August 10, the BimmerWorld Racing team traveled to the Kansas “Roval” just days later with a repeat victory in mind.

Although a pair of top-6 finishes would stand as the best the team’s four-door BMW 328is could manage on the flat-out circuit, the results strengthen the BMW expert’s bid for a first Street Tuner championship as the No. 81 BimmerWorld entry driven by Gregory Liefooghe and Tyler Cooke claimed fifth, followed home by the sister No. 82 CRC BRAKLEEN® BMW piloted by Seth Thomas and Dan Rogers.

With the rules requiring BimmerWorld’s in-house built BMW 328 racecars to carry more weight than the rest of the other models being used in the ST category, a track like Kansas—one where drivers spend more time accelerating per lap than any other circuit—was always going to favor smaller, lighter two-door vehicles.

But with the inherent handling and braking capabilities offered by BimmerWorld’s aftermarket components, most of the acceleration limitations could be clawed back when turning or stopping was involved. Knowing the limitations they faced, BimmerWorld owner/driver James Clay would have liked for another Elkhart Lake finish, but accepted the Kansas result as the best outcome for what the current rules have to offer.

“We had a couple of very solid results in a row for the BimmerWorld team, and we made some big gains in the championship,” he said.  “With two races to go, we are about a half a race behind, in baseball terms.  I feel like we have excellent cars and the best team in the field, but we don’t necessarily have the strongest cars in field due to the current performance balance, so we will need a little luck to close this thing out on top.”

For Liefooghe and Cooke, cracking the top-5 was a major accomplishment that has tightened the run towards a Championship.

“The track was basically three long straights with three extremely tight hairpins linking them,” Liefooghe said. “We were great on brakes but with the weight we have to carry, we were not shining in the drag race out of the corners. The layout was not a good fit for our car, but we made the best out of it.

“As far as the championship, we will focus on what we can control: our preparation and our performance on track. We’ll see where we stand after that. Each race can see some huge points swings. Just two races ago, we were sitting eighth in the championship, and now we are third. I am confident we can move up even more.”

Although BimmerWorld lost out on having all three of its cars in the top-6 when the No. 80 driven by Greg Strelzoff and Connor Bloum retired at the halfway point, the sixth-place finish by Thomas and Rogers now has two of BimmerWorld cars sitting tied for third in the standings.

According to Thomas, the possibility of being in a tense situation–with drivers from both cars fighting over the same title—won’t materialize in BimmerWorld’s professional team environment.

“With two races left in the championship anything can happen,” he explained. “Having two BimmerWorld 328is fighting for the championship speaks volumes for the teamwork we have displayed all year long.  I don’t see this changing as we go to fight for the title.  We are behind other cars in the points so we need to put distance between us and them. Two cars working together is always faster on track and I believe the No. 81 and No. 82 drivers will work together to make this happen.

“It would be really nice to come into the season finale at Lime Rock with two BimmerWorld BMWs in the points lead so we can decide the championship as a team at BMW’s home track.”

Follow all of BimmerWorld’s activities as they prepare for the penultimate round at Monterey on September 8 by visiting www.BimmerWorldRacing.com, and be sure to watch the Kansas race on August 25 at 3PM ET on Fox Sports 1.